The Secretary for Home Affairs, Mr Lau Kong-wah, arrived in Vienna in Austria yesterday afternoon (May 9, Vienna time). He first called on the Executive City Councillor for Cultural Affairs, Science and Sports of Vienna, Dr Andreas Mailath-Pokorny, to exchange views.

The Home Affairs Bureau of the Government of the Hong Kong Special Administrative Region and the Federal Chancellery of the Republic of Austria signed a Memorandum of Understanding on Cultural Co-operation in 2015. Since then, Hong Kong and Austria have been strengthening the cultural co-operation between the two places, for example in the annual Hong Kong – Vienna Music Festival organised by the Vienna Boys Choir Music Academy Foundation. Hong Kong has also been chosen by the Vienna Boys Choir Music Academy as its first overseas location to set up a music academy in its more than 500 years of history.

In Vienna, Mr Lau also met with the Chief of Staff of the Federal Minister for Arts and Culture, Constitution and Media of the Federal Chancellery of Austria, Mr Michael Rendi, to explore opportunities for co-operation and exchanges on arts and culture. In addition, he dined with members of the Hong Kong community living in Vienna.

Today (May 10, Vienna time), after paying a courtesy call on the Chinese Ambassador to Austria, Mr Li Xiaosi, and visiting cultural facilities including museums, Mr Lau will proceed to Venice in Italy. While in Venice, he will officiate at the opening ceremony of the Hong Kong Pavilion at the Venice Biennale and attend a gala dinner jointly presented by the Hong Kong Arts Development Council and the M+ museum of the West Kowloon Cultural District Authority. He will also visit pavilions of different countries and regions and other cultural facilities, and meet with the Minister of Culture of the Veneto Regional Government, Mr Cristiano Corazzari, to identify co-operation opportunities. 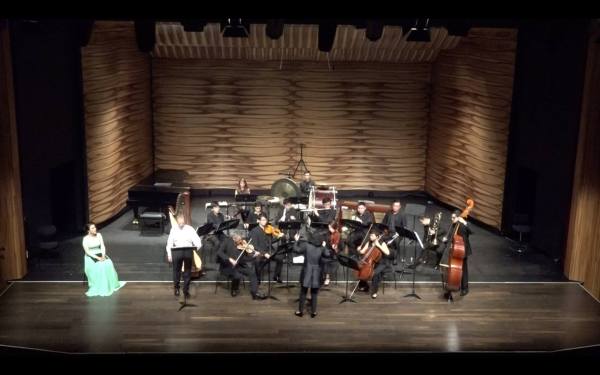 The Hong Kong Economic and Trade Office, Berlin (HKETO Berlin) and the Vienna Boys Choir Music Academy Foundation hosted the welcome performance of the Hong Kong Week in Vienna to showcase the flourishing classical music ambassadors from Hong Kong and Vienna on August 14 (Vienna time) at the concert hall MuTh. About 100 guests attended the concert.

At the welcoming reception prior to the concert, the Director of the HKETO Berlin, Ms Betty Ho, highlighted Hong Kong’s vibrant cultural scene in her speech, “As a metropolitan where East meets West, Hong Kong provides a unique breeding ground for young artistic talents. Every year, there are over 8,000 performances in Hong Kong, attracting an audience of more than 3 million.”

The concert was divided into two acts. Providing a rousing start, the contemporary music ensemble Chromoson performed pieces by the Austrian Hong Kong Composers Connection. In the second half, young talents from The Hong Kong Academy for Performing Arts presented the Cantonese version of “The Song of the Earth” by Austrian composer Gustav Mahler under the baton of the music conductor Sharon Andrea Choa.

Performing arts constitute a core element of Hong Kong’s cultural identity. Ranging from classical music to contemporary dance and Chinese opera, they showcase Hong Kong’s artistic diversity and unique character as a melting pot of cultures. Creative industries are important economic drivers for Hong Kong. They help enhance the innovation capacity of the economy and can be a powerhouse for future economic growth. According to the latest statistics, Hong Kong has around 39 200 cultural and creative industry-related establishments, with about 207 500 practitioners engaged in total.

The Hong Kong Week runs from August 14 to 17 in Vienna, comprising the inaugural performance on August 14, Beethoven Piano Sonatas Marathon on August 15 and 16, and a Chinese Night on August 17, featuring 40 talented musicians from Hong Kong. The Hong Kong Week is an integral part of the Hong Kong – Vienna Music Festival – a multi-dimensional platform to foster cultural collaboration between Hong Kong’s and Vienna’s music talents. It aims to cultivating talents with global consciousness and cross-cultural competence as well as contributing to Hong Kong’s emerging creative ecosystem. The six-week Festival, taking place both in Hong Kong and Vienna this summer, is bringing together 700 participants, including distinguished musicians, artists, music teachers and local students.

The Hong Kong – Vienna Music Festival is organised by the Vienna Boys Choir Music Academy Foundation. The Foundation was launched under the auspices of Consul General of Austria in Hong Kong, Dr Claudia Reinprecht and the Chief Secretary for Administration, Mrs Carrie Lam.

About the Hong Kong Economic and Trade Office, Berlin

The Chief Secretary for Administration, Mrs Carrie Lam, visited Vienna, the capital of Austria, on May 18 and 19 (Vienna time) to begin her six-day visit to Europe.

During her two-day stay in Vienna, she visited a number of world-renowned cultural institutions, including the boarding school of the Vienna Boys Choir, the Essl Museum and MuseumsQuartier Wein, to understand their operation and identify room for collaboration.

At the invitation of the President and Artistic Director of the Vienna Boys Choir, Mr Gerald Wirth, who was recently in Hong Kong to explore opportunities for more collaboration, Mrs Lam visited the boarding school of the Vienna Boys Choir after attending a performance by the Choir to learn about the training offered by this prestigious institution and the life of the students studying there.

She then visited the Essl Museum, which has one of the largest and most significant private collections of international contemporary art in Europe, and met with the owner of the museum, Professor Karlheinz Essl. She also visited MuseumsQuartier Wien, one of the largest art and cultural complexes in the world, to learn about its experience in the management of cultural facilities.

“The Hong Kong Special Administrative Region Government is sparing no effort in developing Hong Kong as a regional cultural hub. In terms of hardware, we are pressing ahead with the West Kowloon Cultural District project, which includes M+ which is scheduled for completion in 2017. M+ will present the world’s most important collection of visual culture in different forms from Hong Kong and the Mainland of China. As regards software, we will continue to build our audience and promote the development of our local performance groups. All this presents a wealth of opportunities for collaboration between the cultural sectors in Hong Kong and Austria,” Mrs Lam told cultural leaders she met during the visit.

To promote bilateral links, Mrs Lam met with various senior officials during her stay in Vienna. She had a meeting with the Federal Minister for Arts and Culture, Constitution and Public Service, Mr Josef Ostermayer, to explore opportunities for cultural co-operation between Hong Kong and Austria, including the possibility of signing a memorandum of understanding on cultural co-operation. She also met with the Secretary General of the Federal Ministry for European and International Affairs, Dr Michael Linhart, to promote bilateral relations.

At the meeting, Dr Linhart noted that Austria and Hong Kong have been enjoying very good bilateral relations throughout the past decades. He said that he sees good potential in strengthening ties in areas such as working holiday schemes, co-operation in wine business and mutual legal assistance, which are areas being discussed at working levels between the two sides. Mrs Lam responded that she looks forward to achieving concrete results in these areas and receiving a high-level delegation from the Austrian Federal Government in future.

She called on the Mayor of the City of Vienna, Mr Michael Häupl, to learn from the experience of Vienna in its smart city initiatives and exchange ideas on ways to enhance the quality of life of citizens. Vienna has been rated as one of the most liveable cities in the world in different international surveys.

Mrs Lam and the delegation also attended a dinner hosted by the Chinese Ambassador to Austria, Mr Zhao Bin.

Mrs Lam departed for Berlin in the evening of May 19 (Vienna time).